The year 2014 showed us, though we are just half through: Without self-implemented software-flaws one just can’t play in the champions league. Strictly orientated to growth, progress and powerful words, short: excellence in planning and execution, we also spotted this error in our previous work and corrected it as fast as possible.

No, as you can determine from the satiric introduction, there was nothing to win for our robot this year.

The Field Robot Event 2014 took place as part of the DLG-Feldtage (DLG-Fielddays), an open-air trade show for farm machinery. Among all those sizable vehicles, 20 teams from all over Europe staged their contest.

Starting full with hope, the illusions of the team from Karlsruhe were soon shattered.

Our robot Beteigeuze, named after the protagonists’ home solar system known from „A Hitchhiker's Guide to the Galaxy“, did stay put and would not move a wheel. And when it did finally move, it made the corn plants suffer. 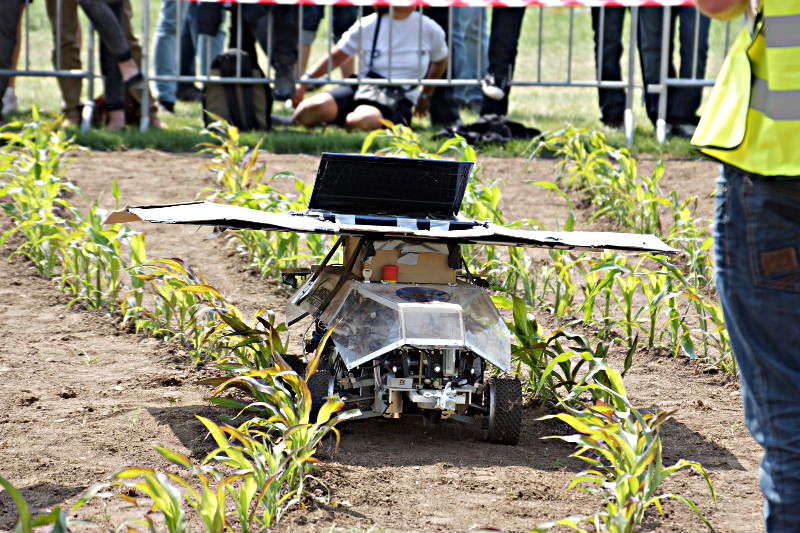 A spectator commented snippy to our robot’s performance: "Da war wohl der Wunsch der Vater des Gedanken“ (freely interpreted: „Seems like this was the triumph of hope over experience“)

The simple diagnosis: Mechanic, electric and software on their own were working fine, only the elaboration was missing. The reason for this nearly complete failure can’t be found in a single programming mistake or the failure of a component. Rather were the becoming engineers, after a complete change of our platform in the past year, not aware of all the traps, bugs and possible malfunctions hidden beneath the shiny shell. This lead to the situation, according to Murphys Law, where it all went wrong when needed most.

However, one record has been set by us: No robot wasted more plants than our’s - and despite the extremely bright sun, all of the golf balls hidden in the field were successfully spotted. Thus there was also some glimmer of light, which gave an impression of the new robot’s potential.

At last, in the Freestyle-Task, Beteigeuze provided proof of its tremendous traction.

Next year, we will rearrange our method of operating completely. For the first time since the establishment of the team we have a platform at our disposal, that isn’t under construction anymore, but will run and be continuously improved.

The main themes will be the development of the driving algorithms, as well as the finalization of electronics. From the mechanic part, lightweight design will be a leading issue, besides the corrections of malfunctions caused by attrition during the anticipated driving and the steady improvements of weaknesses.

We are looking forward to the involvement of many new members, which will get more opportunity then ever to actively work on our robot.

last change: 2014-08-10 KIT – The Research University in the Helmholtz Association